THE WAITING ROOM from Michael Havir on Vimeo.

What are we waiting for? the dentist, lunch, judgement day, the end?
A small room, a door, a million possibilities . .﻿ Collective human behaviour under the microscope, from the mildly amusing to the disturbingly surreal . . . when there is nothing else to do.

Performed by six of Melbourne’s most experienced physical theatre performers and improvisers, THE WAITING ROOM throws all the cards in the air each night – only to find them reordered in ways that seem uncannily inevitable.

Contemporary performance is increasingly concerned with the notion of liveness. The Waiting Room takes this preoccupation one step further. Working like a single organism the six ensemble members, sound artist and lighting operator create and perform each show anew. This process is made possible by the years of shared history and training that sit at the core of the ensemble’s collective practice. Every night is a unique, unrepeatable improvisation.
The Waiting Room is presented by physical performers Carolyn Hanna, Penny Baron, Nick Papas, Tamara Saulwick, Kate Hunter, Andrew Gray and Debra Baton with Michael Havir on music and sound and Suze Smith or Greg Dyson on lights.

"What makes this piece radically beautiful is that it interrogates and embodies the random processes intrinsic to human behaviour. Informed by physical theatre, social psychology and neuroscience, The Waiting Room is a living incarnation of fractal art....The Waiting Room is cutting-edge experimental theatre: a profound exploration of how we choreograph ourselves from chaos."
Cameron Woodhead The Age 24 September 2010
......”For me, the real highlight of the production was the sound work. Arranged and performed by Michael Havir, the composition is sublime. Jumbled airport announcements, tribal drums, soaring orchestral movements and even the taboo ringing of a mobile provide a backdrop that acts as both setting and chorus (in the ancient Greek sense). Laudably the brilliance of the composition never overshadows the performance itself. Instead it adds texture, depth and a necessary point of reference about the emotion being projected on the (improvised) stage.”
Michael Kingston Sep 26, 2010
"The Waiting Room is an extremely difficult experience to describe, it relies on audience interaction, trust and an acceptance of what is going to happen next. However, and I can say this without hyperbole, it is the most mesmerizing experience that I have had all year in the theatre."
Nic Velissaris, Australian Stage

"It seemed to elicit, in its exits and entrances, sad human reflections such as Gauguin wrote on one of his Polynesian paintings: “Who are we, where do we come from, where are we going.” In this way, the work was oddly moving. One room, one door, rows of chairs and ourselves as co-performers"
Douglas Leonard, Real Time 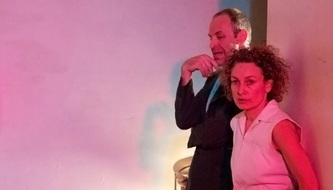 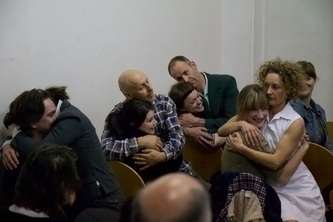 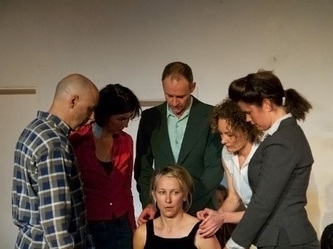 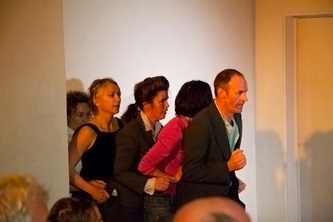 The Waiting Room -another night from Born in a Taxi on Vimeo.